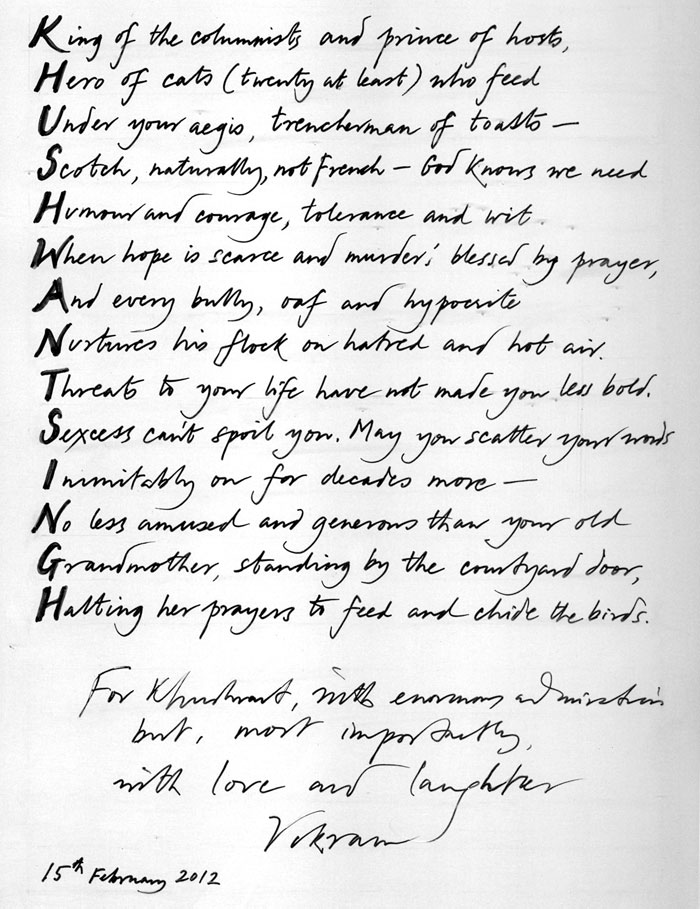 An acrostic on Khushwant Singh

King of the Columnists and prince of hosts,
Hero of cats (twenty at least) who feed
Under your aegis, trencherman of toasts – Scotch
, naturally, not French – God knows we need
Humor and courage, tolerance and wit
When hope is scarce and murder’s blessed by prayer,
And every bully, oaf and hypocrite
Nurtures his flock on hatred and hot air.
Threats to your life have not made you less bold.
Sexcess can’t spoil you. May you scatter your words
Inimitably on for decades more –
No less amused and generous than your old
Grandmother, standing by the courtyard door,
Halting her prayers to feed and chide the birds.

legs outstretched on a

murra turned on its axle —

a Japanese poem of seventeen syllables,

in three lines of five, seven, and five.]

Sudeep Sen is a major new generation voice in world literature and ‘one of the finest younger English-language poets in the international literary scene’ (BBC Radio). His prize-winning books include: Postmarked India: New & Selected Poems (HarperCollins), Rain, Aria (A K Ramanujan Translation Award), Ladakh, and The HarperCollins Book of English Poetry (editor). Blue Nude: New Poems (Jorge Zalamea International Poetry Prize) and EroText (Penguin Random House) are forthcoming in 2016. His poetry has been translated into over 25 languages; and his words have appeared in the TLS, Newsweek, Guardian, Independent, Telegraph, Herald, Harvard Review, Hindu, Times of India, Outlook, India Today, and broadcast on bbc, pbs, cnn ibn & ndtv. He is the editorial director of aark arts and the editor of Atlas. Sen is the first Asian honoured to participate at the Nobel Laureate Week, where he delivered the Derek Walcott Lecture and read from a commemorative edition of his work, Fractals: New & Selected Poems|Translations 1980-2015. In 2013, the Government of India awarded him the senior fellowship for “outstanding persons in the field of culture/literature”.