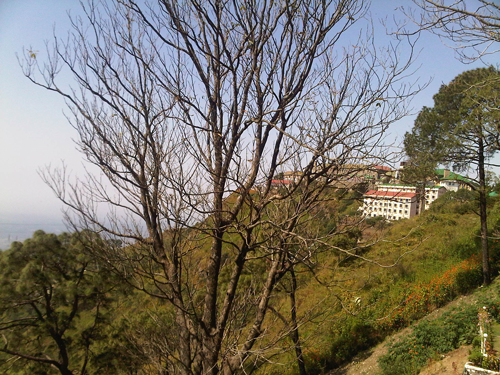 Kasauli is a small hill town full of quaint relics of the British Raj, situated about 1950 meters above sea level and nesting in the Shivaliks. This way Kasauli becomes an offbeat destination for those who would like to get away from the hustle-bustle of the city and of course it makes a perfect destination for the week-ends.

Kasauli’s history can be traced back to the 17th century when it provided refuge and later a home to uprooted Rajput families. In 1842, inspired by the crispy cool climate the British converted it into a cantonment, a status it enjoys even today, thanks to which it remains clean, green and serene.

In 1827, after occupying Sabathu since the end of the Nepalese War of 1816 and converting the Fort into a convalescent depot in 1818, it was determined that the summer temperatures there were too high to suit the recovering patients and Governor General Lord Amherst set out to locate a more appropriate site. The hills of Kasauli were found to be too heavily forested and it was not practical. However, the tiny hill village of Shimla, on his personal inspection, proved ideal not only for convalescent depot but as the seat of Government during the hot summers and development of the village began.

The cool greenness of Kasauli with its many species of trees, ferns and native flora has long been a balm for the weary soul. It may well have been the towering Chir pines and Deodars of the ridge that originally drew the attention of the men of the Honorable East India Company.

The Hill Cantonment of Kasauli currently occupies 658 wooded acres astride a long ridge of the Outer Himalayas. Its breathtaking views from an altitude of 6000 feet above sea-level include the Eternal Snows of the Greater Himalayas sweeping across from the North to the East and the vast plains of the Punjab, directly below it, stretching from South to the West.